The Bible arrived in Abidjan on January 20, 2010, at 5:45 p.m. and was enthusiastically received by WAD officers, Division workers, Conference personnel, and a waiting crowd of church members. 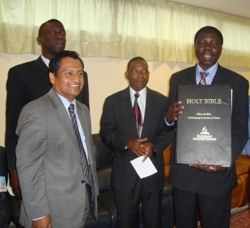 Carried on an arch purposely designed for the occasion, the Bible made an entrance in the Kodjo Ebouclé hall of the Palais de Culture (Cultural Center) on January 21, at about 11:00 am. The hall turned out to be too small for the thousand people who accepted the church’s invitation. This historical event with its high spiritual magnitude and impact took place in the presence of a representative of the Ivoirian Head of State, Mr. Gervais Coulibaly, political and religious leaders, from all works of life within the capital. 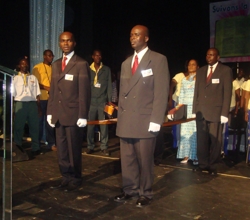 This Bible of about 7kgs is in 66 languages and has been going around the world since 2008. Côte d’Ivoire is its main entrance to Africa. In his speech, Ps. Gilbert Wari, told the audience about the rational for this initiative which is fourfold: physical, geographical, intellectual and spiritual: “Like the Olympic torch, this Bible moving around the world ought to draw the attention of the people to its universality, hence it is translated into 66 languages. No one can look deeply into the Bible, whether out of intellectual curiosity or any kind of interest without coming across the Son of Man and Son of God who has the solution to the multiple problems society faces.” Ps. Benjamin G. Gonkanou, President of Côte d’Ivoire Conference pointed out in his speech that, “the surest way of securing man’s well-being in this world is to base everything on the Bible. The Adventist’s therefore believe that giving a Bible is giving life.”

As far as Pastor Robert Dion, President of the High Evangelical and Protestant Council, is concerned, the Adventists are unassuming people; offering to humanity writings of unique importance, richness and fullness. The initiative therefore, provides a confirmation of the great regard he has for the Seventh-day Adventist.” As for Ps. Jacob Ediémou Blin of the Celestial Church and President of Côte d’Ivoire Religious Denominations Forum, “welcoming the Bible at the beginning of the year 2010 is a good sign for Côte d’Ivoire”; in appreciation of this initiative he concluded that “it was a divine inspiration”. The Imam Idriss Koudouss, President of the Islamic Council stated that “the large delegation that is accompanying him is the evidence that this project is a blessing for Côte d’Ivoire.” He asked everybody to respect that book which is inspired by God.” Concluding the series of speeches, the representative of the Head of State, expressed complete satisfaction of the State of Côte d’Ivoire for the privilege of being the first country in Africa to welcome this Bible.

The ceremony was charged with high spiritual flavor and satisfaction provided by the choristers “Trompettes de l’Apocalypse” and then followed a mass distribution of about 1000 Bibles. This event was covered on national television, radio and the local presses. 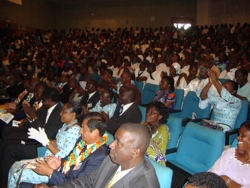 In the same fervor, and the same mind that pervaded from the choir’s presentations, the children presented psalm recitals after which the youth and brass band gave melodies music. With one mind, Christians, Moslems and Animists greeted this initiative. At the end of the ceremony a feeling of satisfaction could be read on the faces of the participants. The celebration was great.

The Bible journeyed on to Ghana.