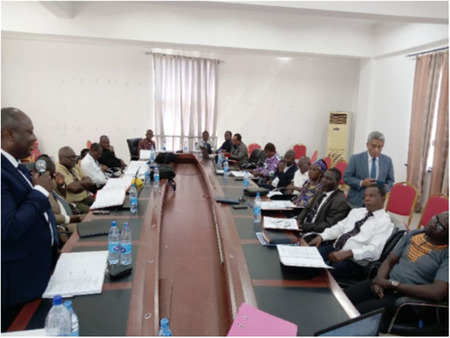 [Photo: Partial view of participants in the 2019 End-of-Year Committee (TCHAD)]

Ndjamena, capital city of the Republic of Chad experienced two special events in the life of the Seventh-day Adventist Church ending 2019. Indeed, this city sheltered the meetings of the Year-End committee of the Union and the celebrations of the fiftieth anniversary of the Adventist Church in Chad.

The Central Africa Union Mission held its Year-End meeting at the Maison de la Femme in Ndjamena, in Chad from December 1 to 5, 2019. This meeting was held under the leadership of the leaders of the General Conference, the Division and the Union.

Under the theme, Loyalty in Christian life, this gathering took place in the presence of the President of CAUM, Pastor Salomon ASSIENIN, Pastor Vincent SAME, head of department representing the President of the Division, Pastor Elie Weick, Pastor Selom SESSOU, Assistant Secretary and sister Marie ACKA Associate Treasurer all from the Division. Attended were also delegates from all the countries of the Central Africa Union Mission, namely Chad, Congo, Equatorial Guinea, Gabon and the Central Africa Republic.

After the welcoming address of the President of the Union, the committee began with the reports of the Treasurer and the Executive Secretary and then those of the departmental directors. Following the observations that were made, decisions were taken for proper functioning of the work in the territories of the CAUM. To this end, the Mission of Gabon and that of the Central Africa Republic have undergone a slight modification at the administrative level with the appointment of Pastor Ogouma Tony, President of Gabon Mission and Pastor Ndoumbeth Eméryc Abib, President of the Central Africa Republic Mission. These administrators and their members were urged to work to move their entities from the status of Missions to that of Conferences.

This meeting was successful because of the trainings received by the participants. Contributed to that were; A.R. Vine Conrad, President of Adventist Frontier Missions (USA), Thomas Ongasa, President of Train Them 2 Fish (DRC), Keyth Mosié (ASI) and Daniel Dajuma (AHI).

The fiftieth anniversary ceremony as second event of this period was held at the Palais du 15 Janvier from December 6 to 9, 2019. The chosen theme was, thus far the Lord has led us. Chaired by Pastor Salomon Assienin, with the Director of Territorial Communities by his side, Mr. Moukhtar Ngarta representing the Minister of Territorial Administration, this fiftieth anniversary ceremony took place in an atmosphere of joy and gratitude to God. For Dr. Allaha-Ridy Koné, President of the organizing committee, considering the challenges ahead stressed on the need of ​​solidarity, which must be the foundation of everything: "More than 50 years of evangelical mission in Chad, Adventism has evolved smoothly alongside other denominations through acceptance and tolerance for decades."

According to Moukhtar Ngarta, the Adventist Church since its authorization to operate on Chadian territory in 1967 has enabled the " Population to benefit from its presence ... The mission of the church is to spread the Good News and prepare men and women to become citizens of the kingdom of God. This goal, the Adventist Church has understood and this is what justifies the theme of the fiftieth anniversary”. He also urged everyone to be peacemaker, a wish dear to the Head of State of Chad. Mr. Ngarta finally announced the donation of a vast land to the Adventist Church by his department for various projects.

One of the highlights of this celebration was the donation of trash bags to the city of Ndjamena. The Mayor of the 1st District of Ndjamena, Mr. Omar Boukahari satisfied with this act thanked the Adventist Church. This action was followed by the temperance and social cohesion parade which brought together all the participants and which ended with the laying of the foundation of a school complex in Dingagali.